The robust styling of the Cross Polo is a nice break from the mundane.

Volkswagen is endorsing the Polo hatchback in various avatars in our country. In 2010, the German automaker launched the Polo in India with 1.2-litre petrol and diesel engine options. Recently the Polo received a minor facelift, after which they have introduced performance variants (GT TSI and GT TDI) and new body kits. The Polo SR was launched in between with a sporty body kit that included sleek styling elements such as body skirts and roof spoiler. On the other hand, the Cross Polo gets a rugged styling arrangement that intends to reflect a crossover look while retaining the design of a hatchback at the same time. Similar treatment was given to its cousin, the Skoda Fabia (Scout), which couldn’t gather much attention and was discontinued eventually. We take a quick spin in the Volkswagen Cross Polo to find out if the rugged styling attracts people and make much sense?

Motor Quest: The first generation Polo introduced by Volkswagen in 1974 was a rebadged version of the Audi 50 hatchback. The Polo is currently in its fifth generation. Volkswagen offers the Polo in three body styles globally – 3-door, 5-door hatchback and 4-door sedan.

Exteriors – The Volkswagen Cross Polo is exactly the same as the standard Polo but with a new rugged dress to make it look tough and strong. The lower section of the body embraces matte black cladding all around that feels solid in terms of quality. The front section reveals a single slat chrome grille instead of the regular two slat grille. There is a round shaped fog lamp cluster, which is integrated neatly with the cladding. Then there is a silver front skid plate on the chin, supported by a wide honeycomb air inlet. 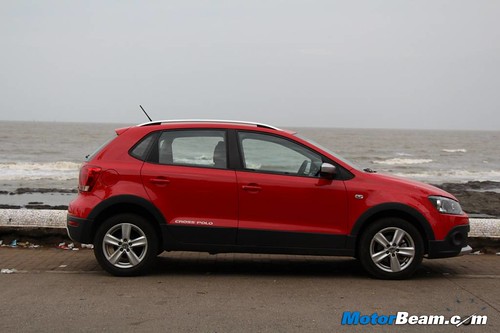 The side profile shows a chunky set of 5-spoke alloy wheels and Cross Polo badging just above the black cladding. The wing mirrors and the roof rails are finished in silver that gives a neat contrast to the body, especially with this specific Flash Red exterior colour. Somehow the side profile of the Cross Polo makes it look more mature than the standard Polo. Coming to the rear, you’ll find reflectors integrated in the cladding, which you won’t see on a regular Polo. The lower section gets the similar silver skid plate and on top the Cross Polo gets a roof blended spoiler. 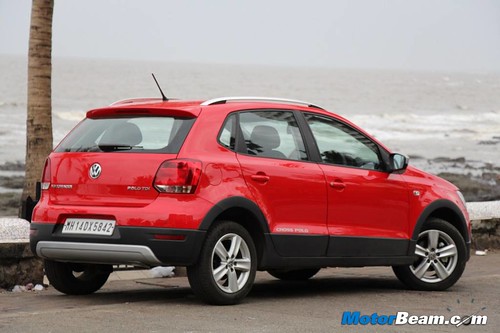 The overall stance of the Volkswagen Cross Polo looks grown up and reflects a different attitude in a positive manner. The addition of new styling elements has increased the length, width and height by 17 mm, 16 mm and 21 mm respectively. However the ground clearance remains the same at 168 mm. The Cross Polo is offered with 17-inch wheels in the international market but in India, it retains the 15-inch wheels. Other than the red exterior colour, you can also opt for silver and black colours on the Cross Polo. 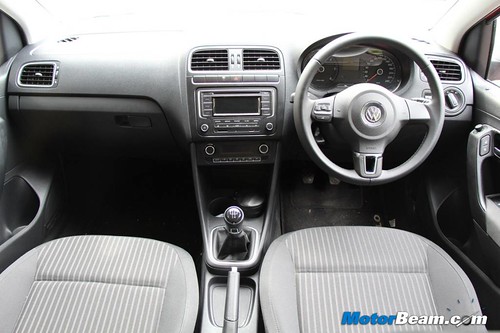 Interiors – Volkswagen has given minor changes on the inside such as the all-black dashboard that looks sporty and serious. On all other variants of the Polo you’ll find beige colour treatment on lower section of the dashboard. In the Cross Polo, even the upholstery gets black treatment, which the German automaker likes to call Livon titanium black upholstery. The all-black theme inside the cabin hugs you and doesn’t give that claustrophobic feel because of the well sized windows. Apart from these minor changes, everything else is the same as the Polo Highline. You get leather wrapped steering wheel, gear knob and handbrake lever along with some chrome accents.

As always, the fit and finish levels are top notch with solid built quality and a well laid out design. The audio system churns out good quality sound and comes with every possible connectivity options including Bluetooth, which is easy to connect and convenient to use with the steering mounted controls. The climate control works seamlessly and chills the cabin effectively. The seats are supportive and comfortable but the rear legroom is limited and three passengers at the back would be a bit of a squeeze. However the boot space is good enough to fit decent sized bags. 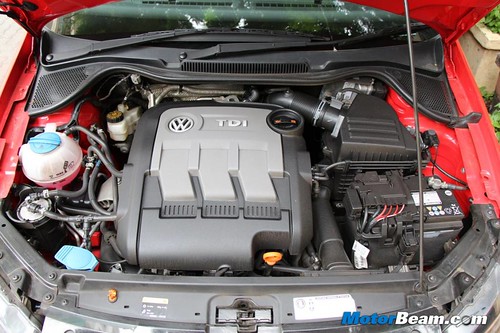 Performance – The Volkswagen Cross Polo features the same 3-cylinder 1.2-litre TDI diesel engine that produces 75 PS of power and 180 Nm of torque. Fire up the oil-burner and you get a rather crude diesel note from the engine bay, which is prominent when heard from the outside but gets almost silent when you are inside the well-engineered cabin. On the move, you will notice a thick turbo lag until 2000 RPM, which can bother some of you in city traffic conditions. The turbo kicks in above 2000 RPM and gives a strong push of torque, which is enjoyable on a clear stretch of road but annoys if you have to stop every now and then in moving traffic. 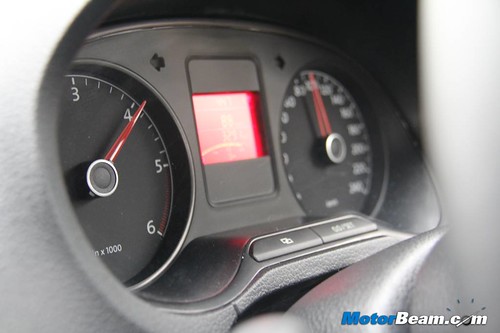 The diesel motor is rev happy and you can spin it till 5000 RPM but the torque band isn’t that wide and to get the most out of it, you have to keep the engine spinning between around 2000 RPM and 4000 RPM. The mid-range is strong and most enjoyable, which makes it a decent highway runner too. Mated to this engine is a 5-speed manual gearbox, which is butter smooth to use and gives you reassuring feedback. You need to work the cogs frequently in city traffic or inclines to cut the considerable turbo lag. Otherwise the gear ratios are well spaced out. One needs to get the hang of this engine for smooth performance. This 3-cylinder diesel motor is not amongst the best engines in this segment but it is quite frugal, delivering 15 km/l in congested road conditions of Mumbai.

Driving Dynamics – The Volkswagen Polo is one of those cars that hit the sweet balance of ride and handling. The suspension is very well tuned for Indian road conditions, as the Cross Polo just glides over potholes without much drama. The ride is impressively flat and there is no sense of bounciness even for the rear passengers. Vertical movement is kept under control but you can hear the suspension thud filtering inside the cabin. Hitting big potholes at high speeds will judder the cabin but the Polo doesn’t lose its line whatsoever. The Cross Polo handles the corners in a mature manner. Body roll is minimal and the agility gives you a sense of confidence. No, it’s not as sharp as the Fiat Grande Punto but it is sharp enough to have fun around the twisties. 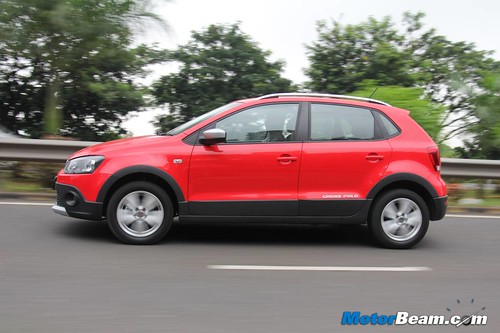 High speed stability is undoubtedly a strong point of the Polo. The hatchback stays glued to its line without letting you feel nervous at triple digit speeds. The steering feedback could be crispier, as it feels on the lighter side. It definitely is proactive off the centre and involves less input but still it doesn’t weigh up as you would like it to on high speeds. At parking speeds and congested situations, the feather light steering is a pure delight to use. The braking performance of the Cross Polo is confidence inspiring as well. Stopping power is phenomenal, be it on highways or emergency situations in city traffic. The brake pedal bite is crisp and accurate. 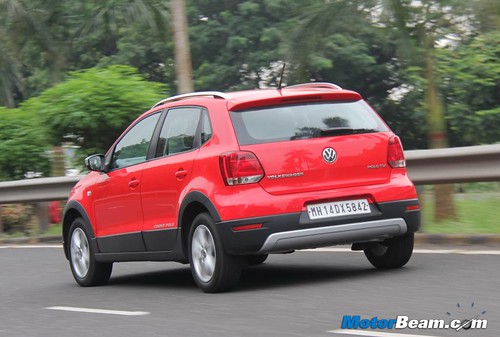 Verdict – At the end of the day, the Volkswagen Cross Polo is simply a cosmetic change over the regular Polo. It would have been a complete package if the automaker had plonked in a more powerful 1.6 TDI diesel engine to match the robust character of the Cross Polo along with some mechanical changes such as 17-inch wheels, higher ground clearance, etc. Despite no mechanical changes, the Cross Polo is priced around Rs. 70,000/- premium over the Polo Highline TDI. People who are style conscious and like the adventurous tone of the exteriors, the Cross Polo makes some sense. It is an attention seeker and reflects a grown up stance. Then there is the solid German build quality and impressive driving dynamics with a good blend of ride and handling. However in terms of outright value, the Cross Polo provides only a little extra over the regular Polo.

The Volkswagen Cross Polo is identical to the regular Polo Highline TDI in terms of mechanicals but with a new layer of icing that looks attractive. 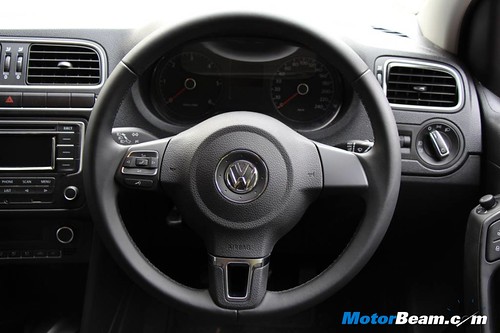 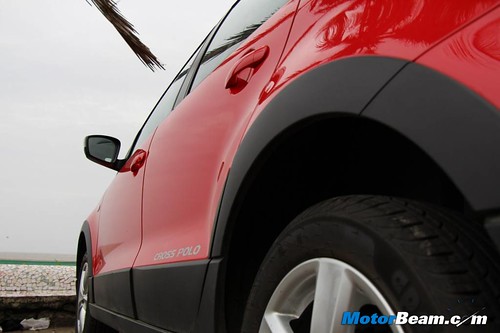