The 2014 E-Class offers terrific ride and low NVH, making it the benchmark in comfort.

Do you know that Mercedes-Benz has offered all generations of the E-Class in India. No, the E-Class is not just a mere 19-year old model, it’s much older but the E-Class nameplate was first used on the W124 which was officially launched in India when the German automaker entered the sub-continent in 1994. The E-Class is Mercedes-Benz’ most popular model in India which is the reason why the company has been very quick in getting the updated vehicle to our shores. The facelift to the current generation E-Class (W212) is not superficial and there is more than what meet’s the eye. With competition getting intense in the executive segment, is the 2014 Mercedes E-Class facelift the right weapon for the Stuttgart based manufacturer to keep its best seller on the top?

Motor Quest: Mercedes-Benz initially used E in the naming of its models to signify Einspritzmotor (fuel injection in German) but once all cars got FI tech, they stopped. The E-Class lineage stretches back to the 1950s.

Exteriors – Mercedes cars have a unique elegance which is not found in its rivals. That is the reason why the buying age of a Mercedes car buyer is higher than the average age of a BMW or Audi buyer. We loved the old E-Class for its elegant design but the new model gets extensive front-end revisions to make it look sportier and thereby appeal to the younger generation. Sure it works and the new E-Class does manage to look purposeful but we are not quite sure how older buyers will respond to the sportier appearance of the new model. This is the first time Mercedes has opted for a single-piece headlight on the E-Class (since the W124) and the integrated daytime running lights look fabulous, they sort of blink all the time but in a very sedate manner. 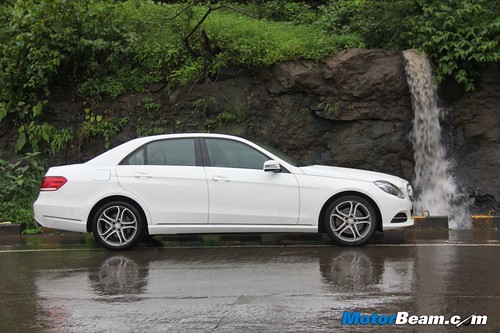 The positioning of the daytime LEDs in the old E-Class clearly showed it was an afterthought. The facelifted E-Class gets new headlights, new grille, new bumper at the front which somehow makes the vehicle look less wide than before. You can opt for the twin-slat grille with the large three pointed star sitting right between. At the side, the company has revised the sheet metal and the body lines flow smoothly to the rear, where the tail lights are the same shape with LEDs but all new in terms of light design. The tail pipes are sleeker and the chrome treatment underneath reduces the visual bulk. The facelifted E-Class surely looks more appealing at the rear with a surefooted stance. The alloy wheels have the same design seen on the A-Class and look stunning. Being 18-inch in size they are bigger than the A-Class, proudly exposing the massive discs. Clearly Mercedes-Benz has gone the sportier way with the exteriors of the updated E. 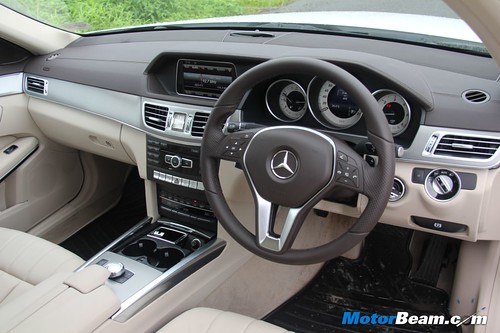 Interiors – Willkommen, the E-Class’ fantastic cabin invites you in. Although changes are not a world apart, the interiors of the E-Class are top-notch and you can bask in the sense of luxury. Built quality is tank like and the light colours along with the front and rear panoramic roofs make the cabin very airy. While the dashboard remains the same, out go the wood inserts, being replaced with silver and chrome bits. The centre AC vents are smaller with an analogue clock sitting right between them (instead of the hazard button which now shifts down). The old car had the clock in the instrument cluster which had five rings, the new one has only three and thus the cluster is not confusing to read on the move. The multi-information display shows vital data with interesting colours, like the Eco Display which gathers data about how long you have been accelerating or coasting.

The launch edition gets some extra bits and is offered in limited numbers. You get a 3-spoke AMG steering wheel while the regular model will be offered with a 4-spoke unit. The E-Class being a Mercedes is loaded to the gill and you get a plethora of unending features including ambient lighting with 5 stage intensity control, electric sunblinds, reversing camera with front and rear parking sensors (PARKTRONIC in Mercedes speak), 3-zone automatic climate control, electrically adjustable seats with lumbar support, programmable 3 way memory for steering and mirrors, rain sensing intermittent wipers, adaptive main beam assist, brake pad wear indicator, etc. You get the usual Mercedes safety tech too like front, side, pelvis and curtain airbags, PRE-SAFE, NECK-PRO, etc. The E-Class gets an updated infotainment system with higher resolution 5.8-inch screen offering navigation capabilities. Two additional buttons have been added near the COMMAND controller which turn on and turn off the screen.

There are abundant storage spaces inside including front and rear arm rests (opens to reveal cupholders). The front seats are extremely supportive and so are the rear. While headroom is good at all places, the rear seat is simply fantastic (for two as the transmission hump is very big) in terms of legroom and cushioning is spot-on with ample back support. However you can’t control the audio system or the front co-passenger seat from the rear (like in the Jaguar XF) which means you will have to adjust the position of the front seat before you start getting chauffeured around. Four AC vents at the rear keeps matters cool (two in the centre and one each on the pillar). The boot is ample in size with a space saver and battery sitting below it. 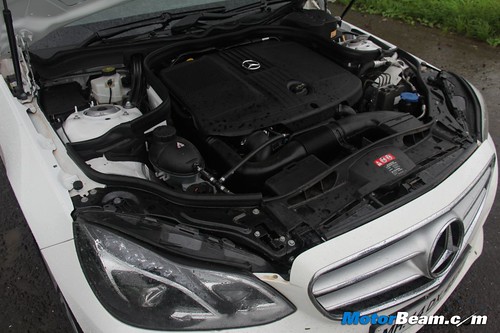 Performance – Mercedes has launched the facelifted E-Class with two engines, which are both 4-cylinder units. The E200 petrol uses a 1991cc engine to produce 184 HP of power at 5500 RPM and 300 Nm of torque between 1200-4000 RPM. Our test car was the E250 CDI which uses a 2.2-litre diesel engine to produce 204 HP of power and 500 Nm of torque. This diesel engine has decent amount of grunt and will perform brilliantly in most situations, as long as you don’t want to skip a heart beat. Power delivery is very linear and there is very little lag too but the motor runs sharply out of breath at around 3800 RPM, redlining at 4500 RPM. Floor the throttle and this Mercedes saloon does move quickly and with such silence, it’s simply outstanding. Although this lower capacity mill doesn’t give it fire breathing power, at full throttle it gains speeds effortlessly and little do you know how fast you are going as you coast along at high speeds. The NVH levels are simply fantastic, you can barely hear the engine even at full pelt. 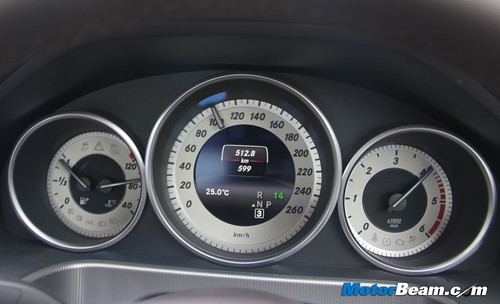 Mated to this motor is a 7G-TRONIC PLUS automatic transmission which isn’t the quickest around and is a bit hesitant in swinging gears downwards. Mercedes continues to use a 7-speed box while some of its competitors have upgraded to 8-speed units. Stuttgart is working on bringing a 9-speed autobox on the E later this year, which should address the lack of cog swapping speed of the current transmission. You get two modes on the centre console, E and S (the old model had Comfort and S) and the transmission is more eager in S mode, while upshifts are done to maximise economy in E mode (there is a Start/Stop system too). You can override the transmission via the steering mounted paddle shifts (M mode) and if you forget to take control later, it automatically moves back into the previous mode (E or S). The RPM needle ticks along at 1500 RPM in seventh gear at 100 km/hr, so it’s a very relaxed motor while cruising. For those who crave for more power from their executive saloons, Mercedes will introduce 6-cylinder engines on the E-Class later this year.

Driving Dynamics – The old E-Class wasn’t a car you would happily push around corners as the suspension was set-up for a compliant ride more than sharp handling. The new model continues with the same philosophy although the handling has improved, thanks to the new DIRECT CONTROL suspension. The vehicle feels eager to turn into corners and maintains its line quite well. Sure there is some amount of body roll but the steering is quite well weighed and offers good feedback too. At low speeds, the steering is light and Mercedes has replaced the left side mirror with a one which actually works, making this luxury barge quite easy to drive in crowded city conditions. 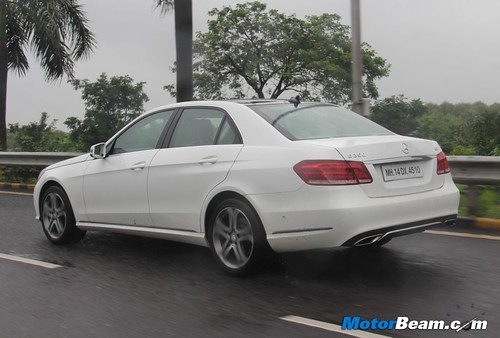 Ride quality has always been the E-Class’ fortress and the vehicle simply glides over the worst of roads. The rear seat ride is fantastic and so is the high level of insulation, the only thing you usually hear is the tyre noise. The suspension being on the softer side does unsettle the car on really bad roads and this is quite amplified at high speeds when you encounter a large bump and this Benz shows some vertical movement. However on good roads, the stability is fantastic and the E stays firmly planted. Braking performance is excellent and the pedal gives good feedback. There is a brake drying function as well which helps in the wet. 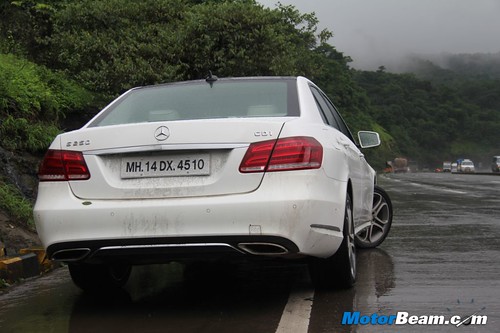 Verdict – The 2014 Mercedes E-Class is clearly more than just a mere facelift. The German automaker has bettered many aspects of its best seller which makes it even more competent in the market place. The updated E-Class looks younger while delivering all traditional E-Class traits of terrific ride quality, ample rear seat comfort and effortless performance. With the updated face, the new E is going to appeal to younger buyers too, thereby catering to a larger audience. Sure the Launch Edition is expensive but the regular E250 CDI will set you back by Rs. 54 lakhs while the E200 costs Rs. 50.14 lakhs (all prices on-road, Mumbai), which is par de course for a car of this size and equipment.

The Mercedes E-Class soldiers on in its current generation, offering tremendous appeal to the luxury car buyer. 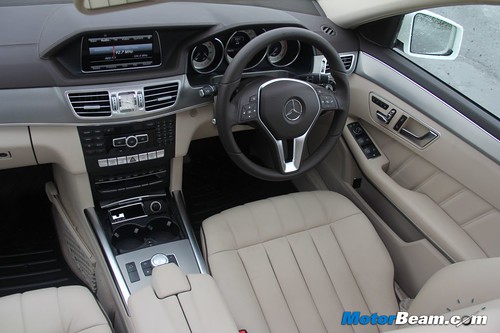 * Front Styling Not To Our Tastes
* Expensive Launch Edition 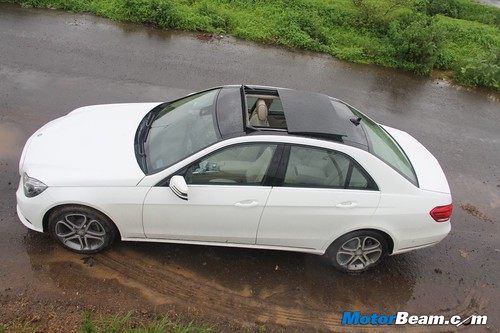