The Indian Chieftain is so feature loaded, it’s like a car on two-wheels but with a soul

Motor Quest: Indian Motorcycles has a long history. Did you know, the company was credited to bringing fuel injection to motorcycles? It also brought electric lighting to 2-wheelers. In the 1950s, post the cease in production of the Indian Chief, a US company bought the automaker and started to import Royal Enfield bikes from the UK, rebadging them as Indians and selling them in Uncle Sam’s country. 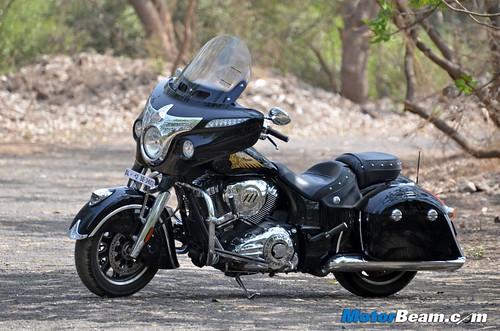 Styling – There is no arguing over the fact that this is one huge motorcycle with attention to detail definitely deserving an applaud. Tastefully done chrome bits stand out instantly while the Chieftain gets a huge front fairing with an electrically adjustable windscreen on top. Signature Indian elements remain like the illuminated war bonnet on the front mudguard (in a chrome frame), valenced fenders, teardrop tank and big chrome crash guard (our test bike also had cruising pegs on the guard which help one stretch their legs on a long ride). 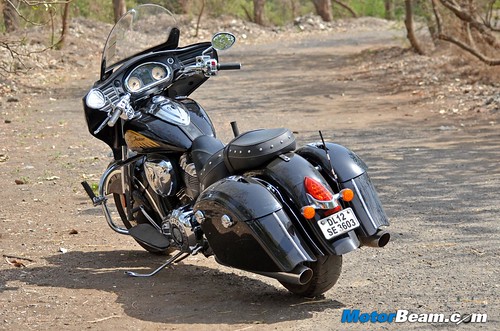 Round headlight is flanked by fog lights on either side for an imposing presence. The Chieftain gets hard saddlebags on each side and feature remote electronic locks which can be operated either via the key or the button on the tank. There are two fuel lids, the one on the left is faux for symmetry and does open revealing the screw while the real one on the right is the fuel lid which shockingly doesn’t have a hinge. The seat gets the Indian badge and an antenna is placed at the rear for the radio. This bike is indeed pure beauty at all times. 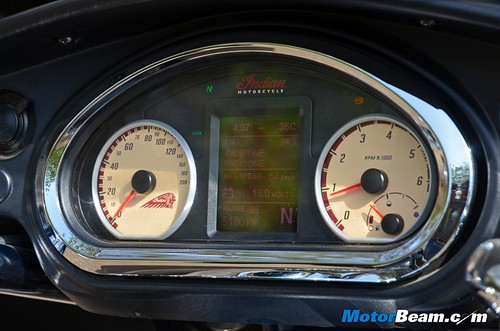 Instrument Cluster and Switchgear – The console is mounted in a traditional way, right between the handle. it features the speedometer on the left and tachometer on the right (with the fuel meter in the same pod) while a display takes centre stage and tell-tale lights are surrounding (the auxiliary lights button is right next to the console on the right side). The multi-information display has a ton of information on offer right from battery voltage, range, odo meter, trip meters, temperature, time, average speed, instant mileage, average mileage, tyre pressure (the bike gets tyre pressure monitoring system), engine oil level and audio system display. There is no pass light switch and instead that button is used to toggle the MID while the right switch is used to alter the brightness of the screen. Switchgear quality is immaculate with the left side having audio controls, windshield height adjustment, indicators, low/high beam switch and horn (very loud) while the right side gets engine kill switch, starter button, hazard light switch and cruise control buttons. Even the palm grips get Indian written on them. 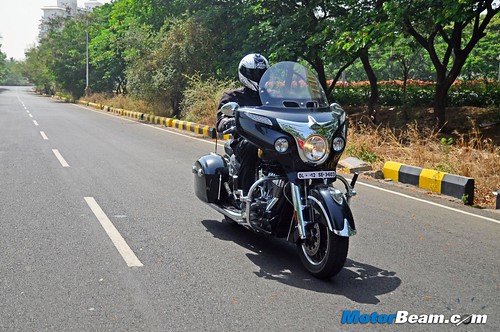 Ergonomics – The leather seats are extremely high on comfort with just the right padding, both for the rider and the pillion. The seating position is upright with the handlebar in easy access. The Indian Chieftain gets a 100 watt audio system so you roll in style as the front mounted marine speakers (on either side of the console) emit decent audio quality and are loud enough to be heard even at triple digit speeds. These speakers are waterproof of course and there are a load of accessories available including more speakers (up to a total of six) which can be fitted in the luggage boxes. There is radio, USB, Bluetooth connectivity options and under the right speaker, there is a small storage where the USB cable is placed along with a pouch to keep your phone when you attach it to USB. There are two charging ports, one right next to the left speaker while the other is in the right pannier. 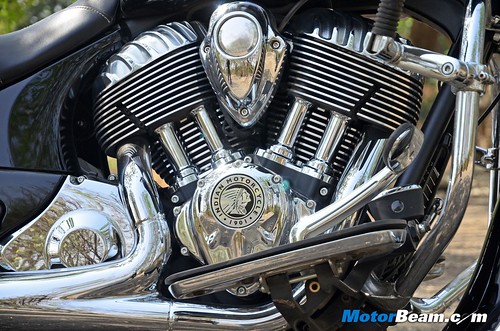 Performance – Just like other Chief models, the Indian Chieftain too gets keyless ignition, so with the keys in your pocket, all you have to do is push the button on the tank to power up. The 1.8-litre, V-twin engine comes to life with a roar, it outputs 139 Nm of torque at 2600 RPM and the limiter kicks in at around 5500 RPM. In that narrow powerband though, it does manage to give ample performance to easily overtake everyone around you while also cruising at 120 km/hr without breaking into a sweat (there is cruise control too). Low-end performance is good but it is the mid-range which truly shines while the top-end is quite lacking. 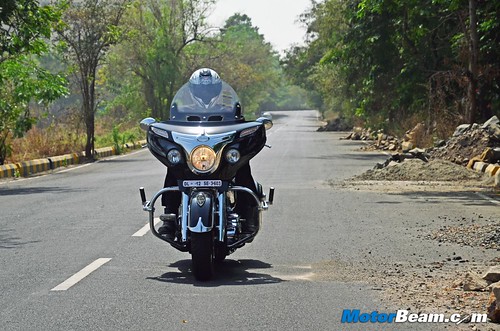 Being an American motorcycle, horsepower numbers aren’t disclosed. When not stressed to the redline, this engine sounds quite exciting and has the vocal pace to keep the audio system’s volume low. The gearing is extremely tall, so the Indian Chieftain does 70 km/hr in first gear, 100 km/hr in second while in third it does 130 km/hr. Post this, the gearing is short so you quickly go through fourth, fifth and sixth, reaching a top speed of 170 km/hr in top gear. Cruising in top gear, doing the ton shows 2400 RPM on the tachometer, so when you want to make a quick pass, all that’s needed is a slight twist of the right wrist, no need for downshifts as there is plenty of grunt till 3500 RPM. 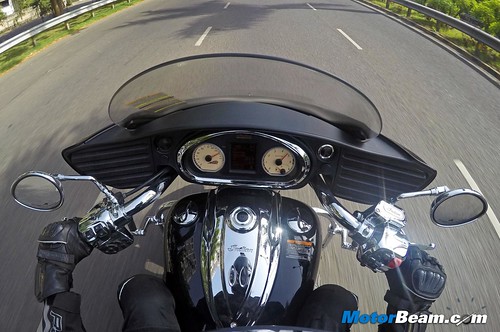 Can you read the speed on the meter? Yes, the Indian Cheiftain is fast

The Indian Chieftain’s V-Twin layout is the result of the motor emitting a lot of vibes through the handlebar and pegs as you stretch it near the redline. But it’s not irritating and feels part of the experience. The 6-speed gearbox is smooth shifting and the clutch is progressive too. The Chieftain returns an average mileage of 18 km/l which is good for this size of a motorcycle. With a 20.8-litre fuel tank, one can comfortable expect a cruising range of 350 kms. Power comes via a belt drive system so maintenance is low. 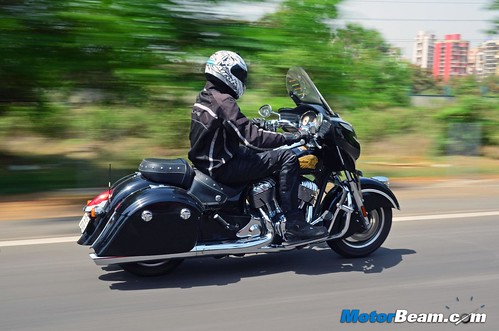 Riding Dynamics – With a 20.8-litre fuel tank, one can comfortable expect a cruising range of 350 kms. It looks big and is quite big actually so the weight does scare you at first. Get astride and at parking speeds you do feel that this is a huge motorcycle but you get used to it no time and are able to ride in the city with relative ease. U-turns will require you to use a lot of energy. This motorcycle weighs a solid 385 kgs but in spite of that, handles very well. It is underpinned by a cast aluminium frame with an integrated airbox and tips into corners with little effort. Grip levels are good on the wide Dunlop rubber. 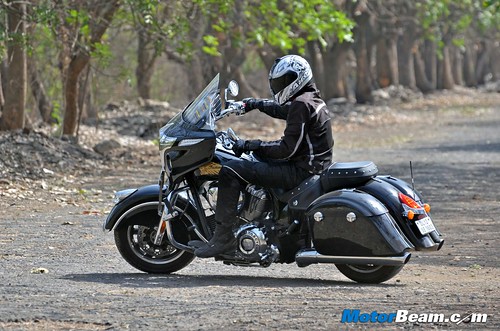 In spite of all that colossal weight, handling is nimble once you get going

The ride quality is excellent and the Indian Chieftain absorbs bad roads in its stride with utmost confidence. The Chieftain has higher suspension travel at the rear and also gets pneumatic pre-load adjustment which isn’t available on the other two lesser Chiefs. High speed stability is very good with things starting to feel a bit fast when you hit 150 km/hr although the big adjustable windshield does a good job to prevent windblast. Braking performance is excellent, the ABS helping in confidently stopping and there is very little fork dive on hard braking. 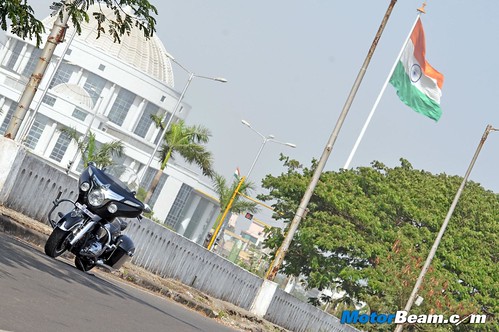 The Indian Chieftain offers cruising freedom, it appeals both to the head and heart

Verdict – The Indian Chieftain is a well put-together motorcycle which is high on quality, equipment and performance. Yes, it’s a big motorcycle so not the easiest for the daily grind but one simply can’t ride this bike to work because once you park it, you know what’s going to happen. The Chieftain then, like all big luxury cruisers is a weekend bike and excels on that front. It is extremely well engineered, performs brilliantly even on our roads and is loaded with all the features you would expect at this price point.

The Indian Chieftain is among the best cruisers in the market today and is an exotic motorcycle to own for those who want the best of luxury on two wheels. 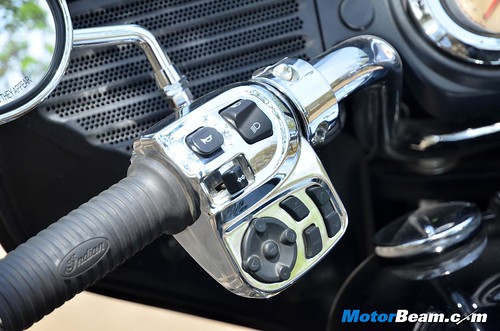 Too many buttons? The lower ones are for the audio system and windshield adjustment

* Big fat cruiser with massive attention to detail, stays true to the original
* 1.8-litre powertrain packs in thunderous torque for effortless cruising
* Loaded to the gills with a ton of creature comforts 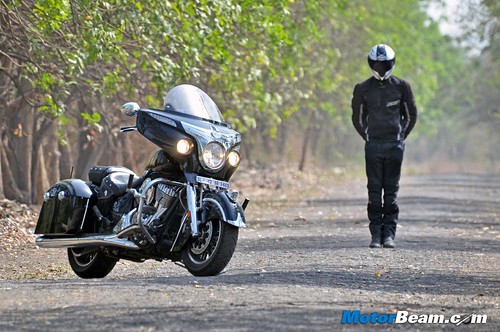 An Indian looks at another Indian with sheer admiration