The 2018 Swift is all-new in terms of design and looks, is lighter than its predecessor

There are very few automobiles in India which deserve to be called gamechangers. Arguably one of them is the Maruti Swift, which completely changed the way people perceived hatchbacks when it was first launched in 2005. The hatchback segment is a very large share of the Indian car market and to crack this is no easy task. Testimony to the fact is that the Swift has featured in top five best selling cars in India for over a decade now. Now, Maruti is ready with the 3rd generation model of this hatchback which promises to be better in every respect. While the car will be launched at the upcoming 2018 Auto Expo, we are in the hills of Lonavala to get up-close and personal with the all new Swift. Will the next generation model carry the legacy of the Swift, we are here to find out?

Motor Quest: The Swift was first launched in 2005 and was an instant success. The car was known for its sporty styling and stupendous handling. Maruti started selling the diesel powertrain in 2007 and this one was a hoot to drive. The turbo would literally give you the kick-in-the-pants feel. In 2011, Maruti introduced the 2nd generation model which was received with a lot of enthusiasm and had a long waiting period. The facelift came in 2014 and now Maruti will be launching the 3rd generation model. 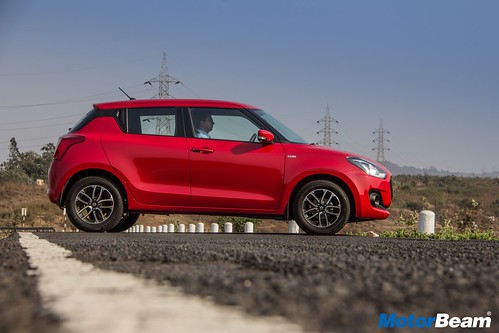 Exteriors – The third-generation Swift underpins an all-new platform called the Heartect. This is also the same platform that the Baleno and Dzire sit on. The hatchback gets an all-new front fascia with a new grille, new LED projector headlights with LED DRLs and a sportier looking bumper. Changes to the side profile come in the form of new 15-inch precision-cut alloy wheels (on the top-spec Z+ trim), and the door handles being shifted to the C-pillar from the doors (like the Chevrolet Beat). There are new LED tail-lights and a new bumper. We particularly like the way the round fog lights have been integrated into the lower part of the bumper. It looks like the car is menacingly smiling at you. Inspite of all the changes, the silhouette is very characteristic Swift and it is more of an evolution. Maruti has given a floating roof feel by blacking out the A, B and C pillars. 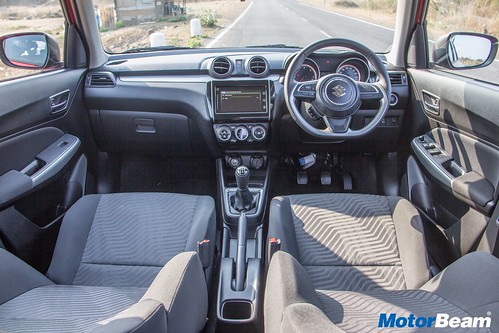 Interiors – As this is a new generation car, the interior too has been completely redone. You get a new flat-bottom 3-spoke steering wheel, whole new dashboard layout and a SmartPlay 7-inch touchscreen infotainment system with Apple CarPlay and Android Auto connectivity. The screen also serves to display the reversing camera. The air-con vents on either side of the dashboard have a rectangular design while the ones in the centre are round. The switches for the climate control are again, round and have a chunky feel to them. The instrument dials are also new. Unlike the Dzire, you get aluminium inserts in the all-black dashboard instead of the faux wood. Quality seems to have improved leaps and bounds and the cabin does have a feel of being premium. 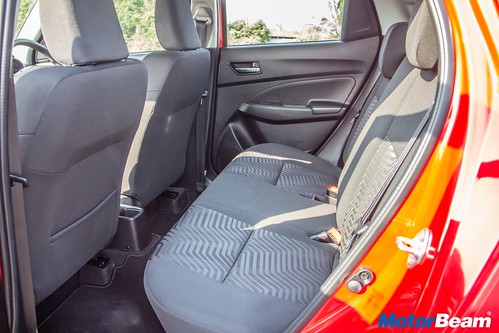 Rear seat space is better than the previous generation car 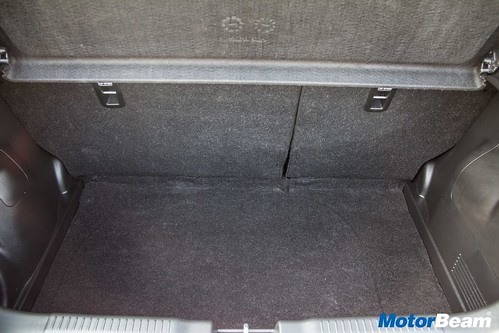 Boot is now more accommodating than before

Maruti has gone for a slightly driver centric cockpit design (by 5 degrees). The driver’s seat gets height adjustment (only in the top-spec Z trim) while the steering gets only tilt adjustment. The AC has been re-worked to cool the cabin faster. ORVMs are electrically foldable and adjustable. Sound quality from the speakers is good and the touchscreen is also very intuitive. We have said it in the past and will say it again, Maruti does have the best infotainment system in the business. Boot space has been increased from 210 to 268-litres and for the first time in the Swift, you now have 60:40 split rear seat which can be folded to extract more room.