The AMT gearbox adds a lot of convenience to the package; well-suited for city needs

The Datsun redi-GO was first launched in India in 2016 in an 800cc guise. Just like its cousin, the Renault Kwid, the redi-GO then got a 1.0-litre petrol engine. Again, following its cousin’s footsteps, the small car now gets a 5-speed AMT gearbox which is offered with the same 1.0-litre petrol engine. We drove the new variant in and around Delhi to see how it performs in city traffic, on open highways and everything in between.

Motor Quest: The Datsun redi-GO shares a lot of components with the Renault Kwid. In fact, both the cars get the same engine options too – 800cc and 1.0-litre. The AMT gearbox, however, is offered only with the bigger engine. 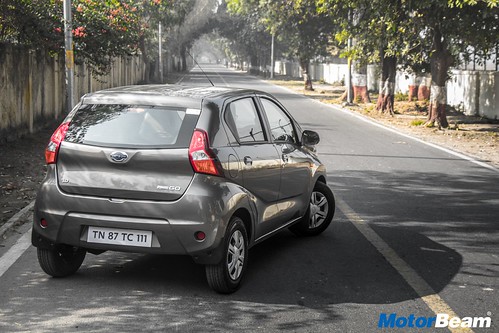 There are zero changes to the exteriors of the AMT trim

Exteriors – The design and the looks of the Datsun redi-GO 1.0 AMT remain unchanged and there is no visual differentiation between the MT and AMT models, in fact, it doesn’t get a single AMT badge. The tall hatchback gets crossover-inspired design elements like the flared wheel arches and high ground clearance (185 mm). The hexagonal-shaped grille, sweptback headlights, LED DRLs and the high-set tail-lights continue to feature on the AMT version as well 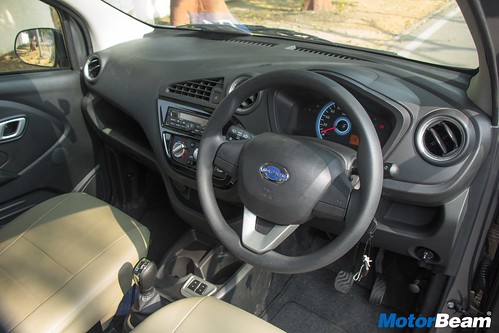 The interiors get some very minor changes

Interiors – There are hardly a couple of changes to the interiors of the AMT version. The dashboard continues with the same layout but you get a new gear lever which is thankfully much better than the rotary knob that has been fitted on the Renault Kwid. The instrument cluster misses out on a tachometer but you do get a gear position indicator. The audio system has been given a mild upgrade and it gets Bluetooth connectivity now, however, the sound quality from the speakers is absolutely disappointing. On the safety front, you get a driver side airbag only. Head room is excellent but the seats are narrow and not too supportive. Boot space is very limited too. The rear seat belts aren’t retractable which means even if you wear them, there are of no use because they won’t protect you from hitting the front seat in the event of a collision.