Mahindra entered the sub-4-metre compact SUV race long before it became the rage with the Quanto. Essentially a chopped version of the Xylo with the ability to seat 7. Since then, the market has grown exponentially and Mahindra kept refreshing their compact SUV line-up every now and then. The TUV300 has fared relatively well in this hotly contested segment and with almost four years into the launch, Mahindra has given it an update. Does the update make the TUV300 an SUV to consider? We find out.

Motor Quest: Mahindra’s Quanto was the first mainstream compact SUV in India. It’s USP was that it could seat 7, thanks to the jump seats in the back. However, people perceived the Quanto as an outdated and unsophisticated product in front of more modern rivals like the Ford EcoSport. Mahindra revisited the concept with the TUV300 in 2015 and NuvoSport in 2016. The TUV300 has found decent takers, particularly in the rural parts of India. Now, Mahindra sells the TUV300 in two guises, a sub-4-metre 7 seater version and a longer 9-seater version. 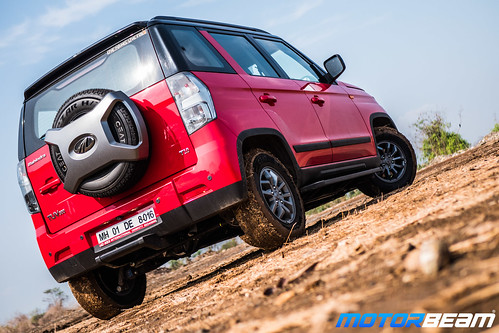 The TUV300’s tall and quirky design looks out of shape

Exteriors – The updated Mahindra TUV300 looks the same save for the blackened grille, headlamps, black side cladding and wing mirrors, X-shaped spare wheel cover and clear tail lights. Other additions include a new ‘Highway Red’ paint shade and DRLs. All these changes are minor to really lift up the appearance of the car. It makes the TUV 300 look just that bit more urbane and sporty. 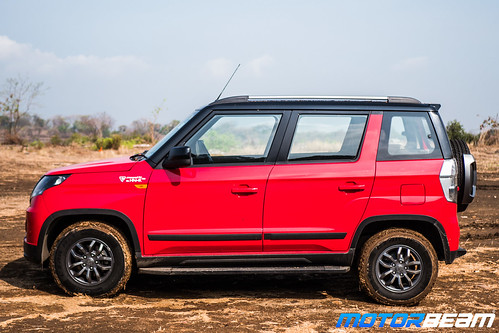 The design gives out a rugged and tough vibe

But the overall design still lacks the modernity we have come across expecting from compact SUVs. The profile is so tall, it makes the car look disproportionate. On the flip side, we felt the high bonnet adds a sense of robustness to the design and the wide, square hatch reminds us of some bigger SUVs. The styling isn’t to everyone’s tastes but the TUV300 does look way better than the older car.

Mahindra TUV300 Plus Base Variant Spotted