Bajaj Auto caught up with the cruiser market early as it launched the Avenger way back in 2005. 10 years later, the company has given its sole cruiser brand a new lease of life. The update has been long awaited and in between, the firm’s focus was entirely on the Discover and Pulsar that the Avenger was completely ignored and much forgotten. Now with the 2015 update, there is just not one Avenger but three of them, two in the 220cc space. Known to be an affordable cruiser motorcycle, the Bajaj Avenger now gets two versions – Cruise and Street, but are the changes enough to say the Avenger has significantly improved?

Motor Quest: The Bajaj Avenger 220 was launched in July 2010 and an update has come after a long 5 years. The bike is inspired from the Kawasaki Eliminator and now comes in two variants although mechancally both remain the same to the predecessor. 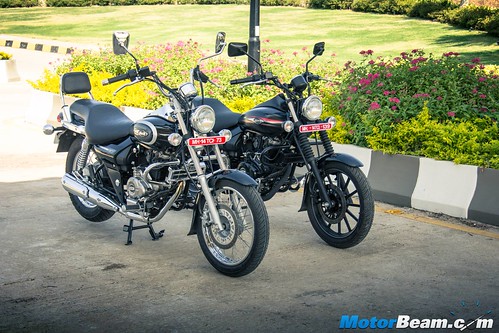 Black or chrome? Bajaj now offers you the choice of both

Styling – Starting with the Avenger Cruise 220, the changes aren’t that striking as one would expect. There is much more chrome than before, new ‘Divine Black’ colour scheme, fresher graphics and of course the new Avenger 3D logo at multiple places including the tank, handlebar and the pillion backrest (on the back plate). The Cruise also gets a chrome cover for the oil cooler while the headlamp features white hue. The chrome on the Street can be seen in the ring surrounding the headlight, instrument cluster and the side stand. There are also clear lens indicators on offer which are flexible and less prone to breaking. The Cruise model continues with the classy spoke wheels. 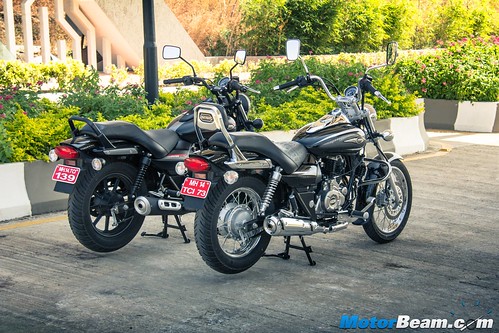 The Avenger Street 220 is quite the opposite and goes for the stealth all black look, minimising chrome to as much as possible. The key difference between the Cruise and Street models is the chrome and black, the latter even getting the engine cover and rear shock absorbers finished in black for a sporty appearance and comes in a cool matte black shade but somehow the front mudguard and rear cowl doesn’t get that treatment. But that’s not all, the Avenger Street 220 also gets alloy wheels and rubber bellows on the front forks to hide the silver finished telescopic suspension. Those associating a cruiser with chrome will appreciate the Avenger Cruise 220 while the younger cruiser buyer will certainly get attracted to the sportier looking Street model. 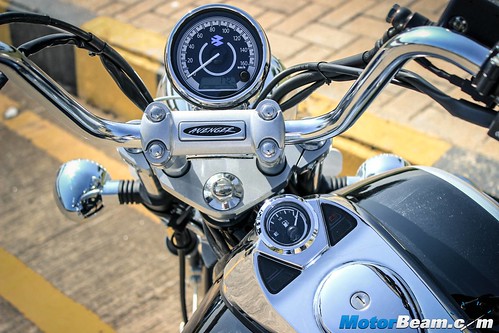 Basic console is very cruiser like with the essential readings

Instrument Cluster and Switchgear – Both bikes share the same instrument console so there is a large pod for the speedometer which has an LCD unit for the odometer and single trip meter. The four tell tale lights (indicators, high beam, neutral and low battery warning) are on the tank next to the fuel meter but there is a big difference between the Cruise and Street models here as the former gets a chrome finish while the latter makes do with black finishing. Switchgear quality is good with the typical Bajaj placement but the buttons are a tad small for our liking while the pass light switch is a bit unconventional. There is a hinged fuel lever and Harley-Davidson needs to learn from this as their bikes don’t get this simple yet important feature. A helmet lock is present at the rear while the handgrips are new. 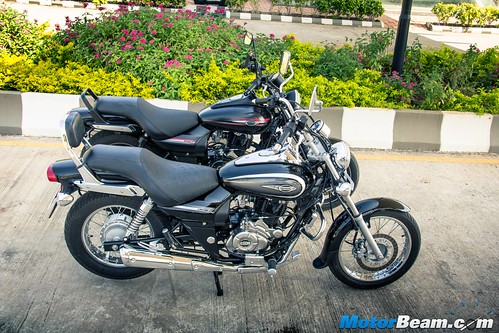 Both offer upright seating but the handlebars are very different

Ergonomics – Here lies the big differentiator between the two Avenger 220s. The Cruise gets a taller crane-neck handlebar which Bajaj likes to call ‘Highway Comfort’ while the Street makes do with a city friendly lower set bars which are aptly termed ‘Street Control’. One sits upright on both bikes but the riding position is a bit different due to the handlebar design, the footpegs also getting a revision. The seat is now 15 mm thicker, resulting in increased seat height and added comfort while the Cruise with its backrest turns out to be slightly more comfortable for the pillion. There is also an aesthetic bracket for the windshield mount and the visor isn’t standard (costs Rs. 2500/-). The mirrors on neither bike offers good visibility and can be used in either vertical or horizontal position. 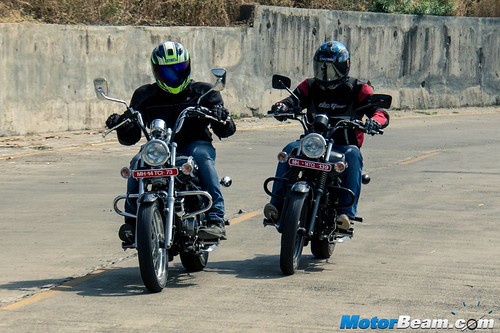 Same 220cc engine continues without any update in output

Performance – The same 220cc powerplant continues on the new Avenger which does duty on the Pulsar 220 as well. There is no increase in power or torque which is quite disappointing although Bajaj Auto does claim that there are improvements to the motor for better performance and refinement. The 19 PS motor has been tuned for good low and mid-range performance with 17.5 Nm of torque on offer. The company has improved the CDI for faster throttle input but it’s mainly the NVH which feels better than before as vibes are well contained in the mid-range although they can be felt on the pegs and mirrors near the redline. The bar-end weights do help in reducing vibrations on the handlebar. 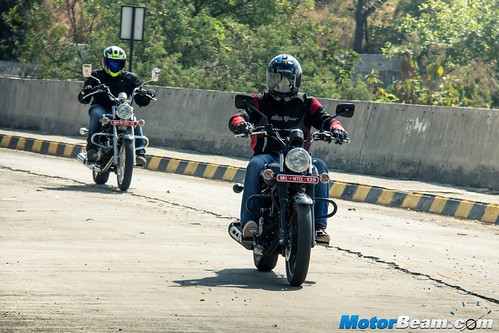 Refinement and NVH has improved with tweaks to the motor

However, since the update comes after almost 5 years, more power would certainly have helped on the Avenger 220s. There is still enough grunt for city and highway duties and 0-100 km/hr comes up in under 13 seconds while the bike hits a top speed of 125 km/hr. It’s best to cruise under the ton as the 2-valve mill feels calm there. The motor doesn’t have the cruiser sound as one would expect and the exhaust note is very similar to the Pulsar 220, it’s throaty. The 5-speed gearbox offers smooth shifts and the clutch is light too, making it easy to ride the bike in stop-go traffic. Real world efficiency is around 40 km/l. The motorcycle gets a new drive chain which is claimed to have a longer life by 15-20%. 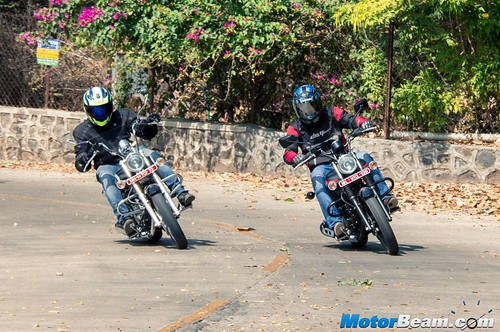 Riding Dynamics – Bajaj Auto has made some changes like added a second spring rate in the rear suspension for improved ride quality while also reducing bottoming out on bad roads. Ride quality has improved from before, it’s a bit on the stiffer side at the front while the rear is comparatively a bit soft. But as expected, the Bajaj Avenger 220 does a good job of absorbing the bumps of our roads and remains stable at high speeds too, the Cruiser more so, thanks to it being 5 kgs heavier while the commanding handlebar position does make you feel more confident. 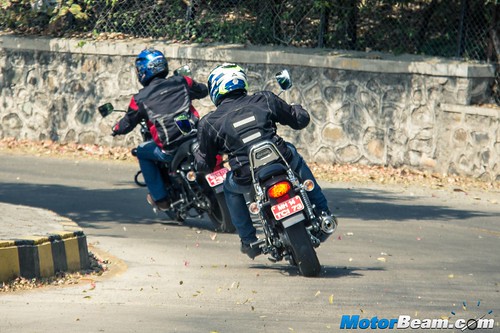 Ride quality has improved while bottoming out has reduced

Among the Street and Cruise, it’s the former which feels more comfortable to ride because the latter’s higher set handlebar does turn out to be a bit taxing on the shoulders and back. The Avenger Street 220’s lower set handlebar makes it quicker to turn in and thus the better handler among the two with handling being good by cruiser stands but don’t expect much, this bike has a long wheelbase. Grip from the tyres is good but they aren’t tubeless which is a bit shocking. Another shocking thing is the lack of a rear disc although braking performance is good and the usable range of the rear brake liner can also be seen. Tap hard on the brake lever and the rear will skid a bit, losing out on some feedback. 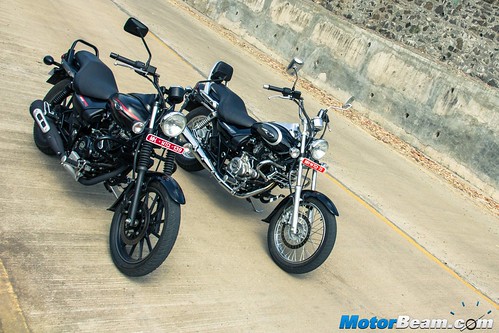 The Avenger isn’t much different in riding from its predecessor

Verdict – Bajaj Auto took a long time to update the Avengers and had forgotten them completely in the quest to focus on more volume centric models like the Discover and Pulsar. The update to the Avenger came in quite silently as there wasn’t much hue and cry about it like is the case with almost all new launches these days. No bikes were spotted on test and that was because the engine hasn’t been altered in any way which is quite disappointing. But the saving grace is the pricing as Bajaj has kept it very competitive, making the Avenger 220 a great choice for those wanting a cruiser on a budget.

The Bajaj Avenger appeals to the masses as it is a very affordable cruiser motorcycle. With the Street 220, the company is now addressing a new segment of buyers who dream of a Harley but find it too expensive. 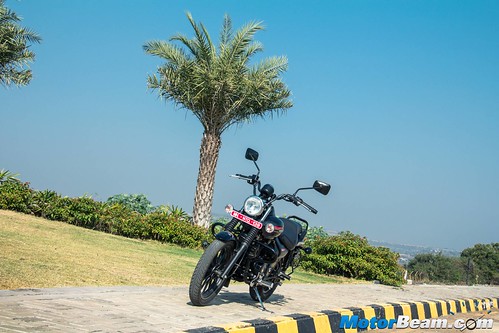 * Freshened up styling, the Street 220 looks sporty and young
* Improved NVH with reduced vibrations, the motor is now more refined
* Affordable cruiser which can also perform decently on the highway 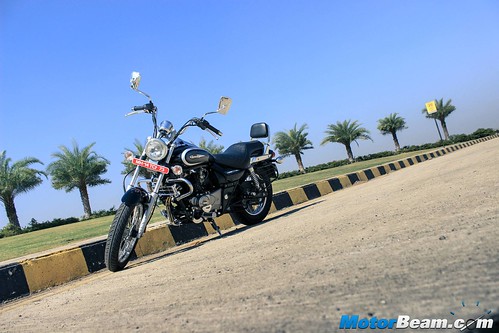 The Avenger Cruise 220 is for those who just love chrome 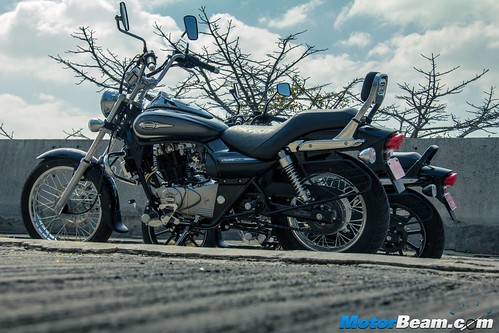 A more thorough update for the Avenger would have been nice

“The Avenger Cruise 220 doesn’t bring much new to the table but the Street 220 is quite attractive and would be my pick among the three Avenger models. The Street beats the Cruise in terms of comfort, handling and of course visual appeal. A bit more power and torque would surely have helped the 220cc Avenger in performance while some more features like a projector headlight and a rear disc would have been a nice addition for this long due update.” – Faisal Khan, Editor, MotorBeam.
“The Cruise 220 is totally like the older Avenger 220 while a few updates in the styling are noticeable. There’s much more chrome on the bike and the handlebar is totally new which is a bit slunged in, making it more like a cruiser based handlebar. The shock ups absorb a bit better but the mechanical changes are very less. The Street is much more of a new design on the older canvas of the Avenger 220 but much more attractive with better manoeuvrability through traffic.” – Dhanil Vira, Road Tester, MotorBeam.
“The Street 220 has the proper power punch and just whizzes past traffic. It looks great in matte finish but the glossy front mudguard doesn’t go well with the matte finish. The Cruise 220 is just covered with too much chrome all over. It performs good on the highway but its handlebars result in back and shoulder pain. The Cruise comes with normal foot pegs for the rider but I felt the larger foot rests are missing which would result in more comfortable cruising.” – Viraj David, Road Tester, MotorBeam.