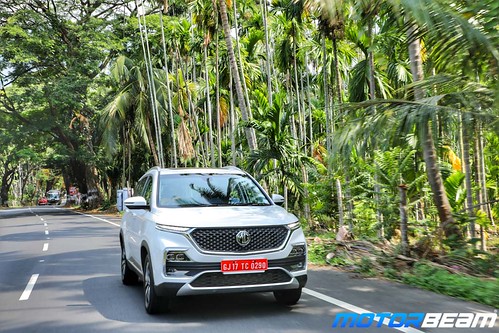 The diesel engine has an impressive mid-range

Performance – The Hector gets both petrol and diesel power options. The 2.0-litre diesel is the FCA-sourced MultiJet engine which also powers its two main competitors, the Tata Harrier and the Jeep Compass. Although power and torque are pretty decent on paper, (170 PS at 3750 RPM & 350 NM at 1750-2500 RPM) it is the turbo lag which tends to dent the performance of this engine. In the city, drivability is compromised as the turbo takes time to spool up. The turbo sings its song post-2000 RPM after which the performance is nothing short of brilliant. There is good punch from the mid-range and power does tend to fade at the high end of the rev band. This engine revs all the way to 5000 RPM and does get very vocal at this point. Cruising on the highway is simply effortless as the 6-speed manual transmission has well spaced out ratios. MG is currently not offering the Hector with a diesel automatic option even though the Compass just got a 9-speed in the Trailhawk and the Harrier is soon slated to get a 6-speed torque converter. We expect this engine to return a fuel economy of around 14 km/l which is probably the best in the segment. 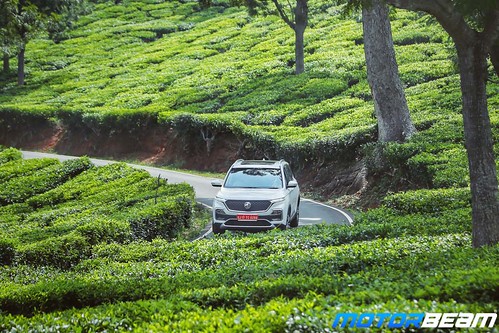 Both the engines suffer from turbo-lag

Post 2000 RPM, the diesel engine delivers excellent performance and is the most fuel-efficient in its segment

The petrol powered Hector comes in 3 configurations, with the hybrid, without the hybrid and with a 6-speed DCT. We had a chance to get behind the wheel of the Hybrid variant. The same 1.5-litre gasoline motor does duty on all the petrol versions. It churns out 143 PS at 5000 RPM and 250 Nm of twisting force from 1600-3600 RPM. Even the Hybrid version has the same output. Turns out that the Hybrid uses E-Boost technology and Regenerative braking along with Stop/Start to improve the fuel economy by 12% without any change to the power and torque figures. This engine is mated to a 6-speed manual transmission which offers slick shifts but tends to get a bit notchy when you want to shift in a hurry. Same is the case with the gearbox in the diesel. The petrol Hector suffers from a greater lag than the diesel and drivability isn’t great below 2000 RPM. But once the turbo spools up, this engine really comes alive. The mid-range and top end are really strong and this engine loves to be revved. It tops out at 6000 RPM and has a very vocal and racy note to it. We haven’t sampled the DCT yet but will do it soon. This engine should return around 11-12 km/l in the real world. 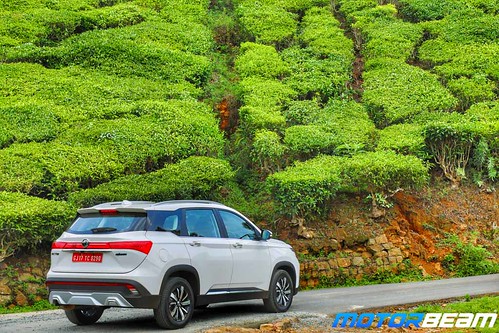 The light steering isn’t for enthusiasts but offers great ease

Driving Dynamics – The steering feel is similar with both the petrol and diesel cars. It is very light, which means that moving around in the city is very comfortable, however, it doesn’t weigh up as much as you would like when you pick up speed. So out on the highway, the steering isn’t as confidence inspiring. Our blast around the twisties was a testimony to the fact, having said that, it is neutral for most. Only enthusiasts would prefer a more feedback-rich steering. Being a heavy car, there is a fair amount of body roll but it is in control. 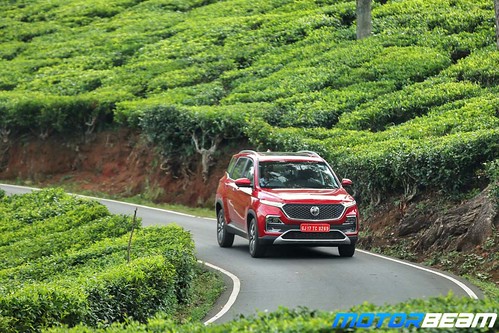 Ride quality is what we loved the most and the Hector does know how to keep passengers comfortable both at high and low speeds. In fact, the ride quality is so good that you would love to take this car on bad roads intentionally. However, on really bad roads, there is some amount of vertical movement from the suspension but it is well controlled. The Hector performs well under braking and the rear disc brakes ensure that things are in control at all times.