Touring capabilities with ease of riding? Both these bikes are made to go places

Mid-capacity touring motorcycles are often the favourite spot for Indian enthusiasts. Royal Enfield has been catering to them for quite a long time with the Classic series of motorcycles. Bajaj, being one of the top Indian manufacturers quickly responded to the market needs with the Dominar 400. While the Royal Enfield stays pretty much the same despite the new paint scheme and limited editions, Bajaj has just updated the Dominar 400 for 2019 making it more appealing. So, we put these two motorcycles on a quick shootout to find out which comes out as a more capable friendly tourer.

Motor Quest: Bajaj launched the Dominar 400 back in 2017. The motorcycle found itself in appraisals for being an extremely capable package although there were few niggles that Bajaj tried to solve continuously over the years. Now for 2019, Bajaj has updated the Dominar 400 with all the necessary equipment. The Royal Enfield Classic 500 was first introduced in the year 2009. Since then, the Classic series of motorcycles has been timely revised with new paint schemes and limited editions. 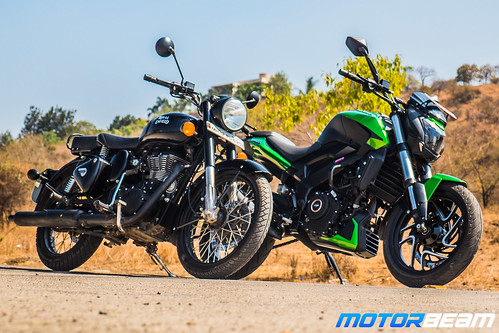 The Bajaj is handsdown more attractive than the Royal Enfield

Styling – Both the motorcycles follow completely different approaches when it comes to design. The Dominar 400 is equipped with well-proportioned body panels, muscular tank, angular sculpts and a beautiful LED headlamp set-up. The design is further complimented with striking new auroral paint schemes along with the black diamond cut type alloys. The Dominar also gets a black treatment on the foot-peg brackets and the engine casing to aid for a more premium feel. Bajaj has also worked on small details like the new cast aluminium mirror bracket to make the bike look fresh. The double barrel type exhaust is also new making the bike look fresh all over. 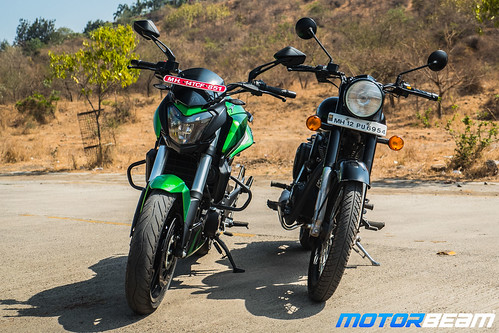 The Classic is retro while the Dominar looks quite beefy

The Classic 500 on the other hand, continues to wear a traditional Royal Enfield design. A little too less for some, but this is what keeps the Royal Enfield unique. The Classic 500 over here, gets an extensive black treatment all over it to make it look premium. To an extent so, that Royal Enfield had to sell it under the name Stealth Black. All the bits are metal and round, there are no rough edges on the Royal Enfield. It does have a retro charm but there is no denying the fact that the Dominar 400 looks modern and has more road presence.

The TVS iQube claims a range of 75 kms with a top speed of 78 km/hr. There are more electric scooter companies in India then all motorcycle   END_OF_DOCUMENT_TOKEN_TO_BE_REPLACED

The Rolls-Royce Cullinan Black Badge has been launched in India with a price tag of Rs. 8.20 crores. Rolls-Royce cars are an epitome of luxury   END_OF_DOCUMENT_TOKEN_TO_BE_REPLACED

Maruti has launched the Ciaz BS6 in India, along with a new S variant. The Maruti Ciaz line-up has been updated and now the vehicle is BS6   END_OF_DOCUMENT_TOKEN_TO_BE_REPLACED