Back in time when I was quite young, the world either knew the thump of a Royal Enfield or just the 2-stroke commuters running around. But among them was a bike that had a deep rumble with twin exhausts. Maybe it was the borderline OCD that made me think twin exhausts always looked better than a single one. I was too young to notice but would remember the name Jawa! After a long time, we could see and hear it all again as Classic Legends and Mahindra came together to bring the Jawa brand back. We try to find out what’s really new in the comeback as we review the Jawa!

Motor Quest: The Jawa brand was started in Prague in the year 1929. Jawa in India was actually known as Ideal Jawa Ltd. and they had started selling the Jawa and Yezdi motorcycles from the year 1960 and 1973 respectively. They, however, stopped production in 1996 but now they have made a comeback and got the Jawa motorcycle back in the Indian market. 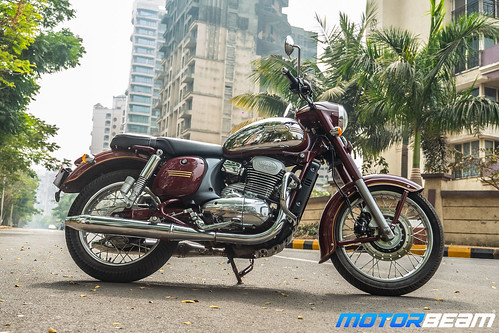 From a high front to a dropping rear, the design flows like the old model

Styling – The Jawa gets the same old retro classic design language all over. It gets a teardrop tank with chrome finish, round headlight with a covered unit that runs over the handlebar and mounts the cluster too. It rather looks very simple and neat. The bike gets a unique colour which flows from the mudguard to the tank and follows till the tail. It also gets the same retro design for the engine with twin exhausts coming out of either side. The tail light ends with a dropping rear and yet matches the classical lines that flow throughout. With the spoke wheels coming in too, it does have that retro charm. 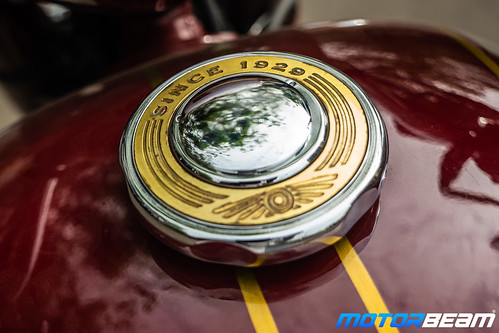 There are Jawa logos all over the motorcycle

It does grab a lot of attention on the road as the design matches the older Jawa quite a lot. There were quite a few instances where I was stopped and asked if it was a Jawa motorcycle. To keep those aesthetics as retro as possible, the Jawa does not get any LED lights. The tail light, headlight and even the round indicators are halogens. There are a total of 4 elements that determine the motorcycle is a Jawa – chrome sided teardrop tank, dual pipes for the exhaust, front telescopic suspension covered with a bigger tube like the older bike, and a number of places where the Jawa logo has been put.

Jawa To Take On Royal Enfield, Launch In 2018